Look what came with AirAsia....

The Kuala Lumpur-Stansted AirAsia inaugural flight landed 20 minutes earlier than scheduled. And there were lots of excitement too at the departure lounge as some people were handpicked and upgraded to XL class. We were also treated to some Cadbury chocolates.

Later at the Radisson Hotel, the special guest of honour came and mingled very freely and even shook my hand and there were lots of laughter and rejoice as the 11th of March came and everything seemed to go swimmingly well.

The 1800 flight from Stansted to KL too left on time, bringing holiday makers who grabbed the £99 offer one way as soon as they became available online.

That evening, there's more merriment at Millbank Tower and I was there quite late although the event too started late. The view on the 29th floor, overlooking the Thames, with the London Eye and the bridges spanning the river – it was magnificient. 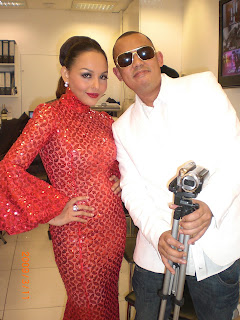 Air Asia brought The Saturdays to kick off the evening. I have not heard of them, and the children sort of tsk, tsk me. Then came Johan, or now better known as JoeFlizzow and his brother Iman as his DJ. Looking at him now doing the rap, I just couldn’t believe that that was the child who sang “Siapa kata gadis Melayu tak menawan” in my kithen in Bayswater some years ago. There and then on the 29th floor of Millbank Tower, surrounded by all very young people, I felt 70. 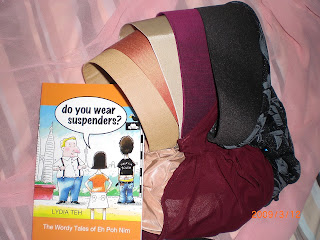 Iman brought with him a gift from his mother – some beautiful Ekin tudungs. Thank you, Kudu. Another friend sent through another journalist, a new book by friend Lydia Teh, that prolific writer – Do You Wear Suspenders? Thanks, Marina. All brought on that historic flight from KL to Stansted.

But of course, AirAsia also brought Noryn Aziz, a gem of a jazz singer. Simply love her voice.

The party was still in full swing when I left. Old people, like young children have to sleep early.

Oh! I love Noryn. Her voice and her style...
Beruntungnya warga warga London ya :)

I haven't heard of The Saturdays either. So, you're not alone.

London is more happening when there's Kak Teh to report them!!

Wow! Really happening in London. An historic event to be remembered. With those very attractive fares, I think my ever popular 'jom mengeteh session' won't take that long to reach its popularity over there :)

Wow! Lucky you! Like many of your other readers, I also like Noryn Aziz - a class of her own.

Hope you have fully recovered.

Happening betul di sana..thanks for sharing the event kak teh.

I saw in on TV too. Was looking out for you, tapi tak nampak. Lepas ni, makin ramailah Malaysians kat Oxford Street tu...

i dunno who those artistes are, but i pun nak tumpang marvel gak at warga london celebrating airasia's virgin flight. :D

Naz, she is a jazz singer and a good one. That was the first time kak teh dengar dia and she has style.

Well, if only she is here to perform for Malaysians here - tapi, her trip is only mainly for airasia programmes. am sure her fans and joe's would love to meet and hear them.

SkyJuice, Thank you for asking - ka teh dah sihat sikit but wish I can rest a bit more. Yes, that's the word - she has class!

Puteri, if only i can arrange for a performance - but they have limited time here. I took Joe to BBC to be interviewed and for him it was back to where his father worked dulu.
It was a nostalgic afternoon for him walking around Covent Garden and back to the BBC.

D, hehe - i will need a trip to Coventary or you come down to London to see me in Ekin. The tudungs are plain, so, it can be used with other patterned ones as well.

DrSam, a mengeteh session in London is something that we can all arrange. So, tell me and i will collect all the pengetehs available...okay?

Farina, the way AirAsia is going - they will be there soon. Tunggu saja and grab the first cheap fare.

paula, i am so ketinggalan. I did nt know abt Noryn before this. I know about Joe because I've known him from small and he is our friends' son.
yes, I am better, thanks.

QOTH, yes, they did it with style. Ticket? well, mums the word for now.

Mrs N, sekarang pun dah ramai malaysian kat oxford street. Oh, i try not to enterframe, so to speak. I did the one on RTM. Although airaisa arrived early, the events were delayed, so we couldnt get to the airside to film the plane taking off.

kay, boleh sangatlah terbang ke sini. Bila lagi? let me knw and we can have a bloggers meet.

mekyam, tak pa tumpang seronok. When are you going back malaya? I am hoping to do so soon..tapi tak tahu bila.

So, bila nak balik kampong - let me know, ya!

@Kak Teh: Glad to know you're better... and you might be comforted to know that I too am like a young child and have to turn in early too. Maybe we should start a club: The Early-to-Bed Folks! :P

Bet they gave you the front seats. So the tudung Ekin arrived safe and sound. Kak Aishah gave you the tudungs of variety colors yea. She sure knows how to shop for tudung and shop for a wonderful friend.

TM, it wasnt a concert but a party - a kind of celebration for the inaugural flight. Ya, i lovethe tudungs - lovethe colours.

Lyana, tak pa take your time. Mesti you are 1000 and one things to do. Bukannya mudah nak relocate balik. Take care.

Wow! I love that Noryn's dress. Just wondering.. was she wearing matching shoes?

andrea, gues what? i didnt look at her shoes!