The summer that was

Mr Haidari would have been appalled, to say the least, at what they are doing to his country. He’d roll his eyes heavenwards, raise his hands in despair and return to his frugal meal of tuna sandwich and tea, resigned to the fact that peace is forever denied in his country that is . He’d be sad and heartbroken that his country is now in ruins and his countrymen are fleeing for safety, dodging the relentless barrage of bombs and mortar attacks. Like Mr Haidari, some of his countrymen are fleeing in search of a safe haven.

But bombs and mortars and killings are nothing new to Mr Haidari. He left some years ago when the killing got to his doorsteps.

He had just given his salam in the mosque after zuhur prayers when he was summoned home and what he saw was to haunt him to his grave. Brutally mutilated bodies of his loved ones were everywhere in his front garden. He couldn’t tell which limbs belonged to which child and in his haste, only had time to bury his wife’s decapitated head, grab a few things and left.

These gruesome events were mercilessly replayed in his mind, day and night, night and day, haunting his very soul. These gruesome events he narrated to us in a voice, perhaps already devoid of emotions. It was the Druze, he said, who wiped out his entire family. He made his way to and felt almost at home in the area around Bayswater and where Lebanese restaurants fill the air with Lebanese music and Lebanese people spill on to the streets as night falls.

We met Mr Haidari one summer afternoon in our favourite Ice cream bar in Whiteleys. We had never seen him before this, but after several ice creams, my husband decided to befriend the old gentleman sitting quietly contemplating his tea, at the table that was to be his for several months if not years after that. His robes had seen better days and he was in need of a shave but his manners were impeccable, betraying his upbringing and his background. He’d rise to his feet as I approached his table and kiss my hand in the manner of a perfect gentleman. And he’d stand up again when we left. Several meetings with Mr Haidari at the Ice Cream parlour made him comfortable enough for him to tell us what had happened and what brought him here.

He had a successful business, he said, one that took him to . He was rich, he travelled the world. But the incident that afternoon in his front garden sealed his fate and changed his life forever. It was correct to say he was just a shadow of his old self. You could tell he was used to expensive suits but he said nothing of the one he got from Oxfam. One that he wore throughout summer and also throughout winter. One that badly needed a wash.

Anyway, we got to know Mr Haidari well enough to bring him home for weekends.

For most of the time, he’d stay in the spare room praying. He didn’t mind if we had to go out during the day but during the night, he’d be standing by the window, waiting for us to come home. One night he told us why.

He said he was scared that we might not return. That we’d suffer the same fate his family suffered. We were the only family he had.

His visits became less frequent. We couldn’t persuade him to wash or change. His mind began to wander but my husband still visited him in his small room, where he said he heard voices of people coming to get him. We also introduced him to another friend who gave him a permanent table at their restaurant, with free meals in rerturn for lessons in Arabic. That seemed acceptable to him - for a while - until he disappeared again. The last time I saw him was one cold day in winter, standing by the bus stop in Westbourne Grove.

I went back to the following summer, the summer that was as hot as this. And I received a distraught call from my husband. There was a knock on the door, he said. It was the police. Mr Haidari was found slumped in his room and had been gone for perhaps a week. Among his few possessions on the table was just a letter naming my husband as his next of kin.

He was to identify what was left of Mr Haidari. But he didnt ‘cos he couldn’t. Mr Haidari had been dead for a week during one of the hottest summers we had ever known. It was a very sad man who rode in the police van with the black bag containing what was once Mr Haidari . But he gave him a proper burial.

This hot summer, the thundering bomb shells raining on just reminded me of Mr Haidari. Al Fatehah to Mr Haidari and innocent victims of the bombings.

Links to this post
Labels: Death, mr haidari, summer, the other 'alf

I have not quite disappeared from the blog world, but have been terribly busy lately. As I can't quite predict when my next update will be, I have appointed a bisu tuli and buta to be my spokesperson, he who had been writing about my little adventures and misadventures that I had shared with him, and he with the rest of the world.

Anyway, just for a brief moment - yesterday was my big day! 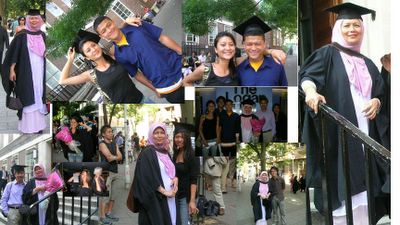 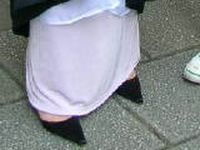 For Mak Andeh
Will certainly update when I have some time to breathe.
Scribbled by Kak Teh at 9:05 am 70 comments: 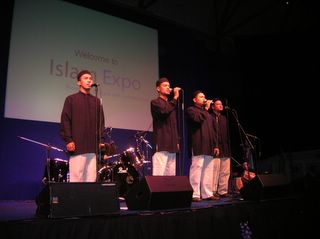 Raihan, the popular nasyeed group from Malaysia, now performing in Toronto and then later in the week in Trinidad and Tobago, will make their way back to London on 18th July and will be performing in Holiday Villa.

Something for the weekend

A book is to be launched soon in Malaysia as a counter attack on Dr M - one that is controversial since the release of Da Vinci Code. This one is called:
"Dah Benci Kut!"

Personally, I think someone should come up with one that is entitled: "Takkan Kut!"

Have a good weekend and I will resurface from the mountains of exam papers soon for some fresh air.
Scribbled by Kak Teh at 7:42 am 19 comments: