My dearest friends,
The entry below was the beginning and this video clip here is part of the end result. Thank you to friends who cajoled, pushed, threatened and blackmailed me to put together a project very close to my heart. Thank you too to my dearest friends Annabel who gave that final nudge and Elva for putting together this video clip. And most of all thank you to Pak Cik Sailors who shared so much. The project, which I must confess is still ongoing, would not have been possible without the cooperation of friends in Liverpool, Cardiff and London. The paper , Alhamdulillah, was well received. An article "Adventures of the Pak Cik Sailors" based on the paper appeared in The New Sunday Times HERE

In conversation with some interesting old friends

The conversation in my living room suddenly became very lively, what with Pak Man telling us about his various TV parts alongside Roger Moore in the popular TV series, with Peter Finch in A Town Like Alice and many more. Pak Ehsan regaled us with stories of Mat Kambing or better known as the King of Soho whose management of the club called The Saint in Great Windmill Street gave opportunities for others like Din to work in the cloakroom and thus not only afforded them the chance to see the budding Rolling Stones but also to meet their future wives. Pak Mid would chip in to tell us about his adventure at sea, having survived the German torpedo which hit his ship, throwing him out mercilessly into the raging sea for three days before being rescued by another merchant ship.

Laughter would break out as they recalled the more interesting adventures all young, hot blooded sailors experienced at each port of call. Pak Ehsan described how Rokiah, all dressed up, would do the inang when they celebrated Hari Raya away from home, and just as we thought we had enough laughter for the evening, Din recalled how he broke the story to his mother back home that he finally found a Mat Salleh wife.

All admitted to having that gush of curiosity and excitement to see England as potrayed in the movies and then to go on and conquer the world – to take Times Square by storm and brave the cold harsh winters of Russia. Malaya’s independence had unleashed in the hearts of these young men, the spirit of adventure that had taken them to the far flung corners of the world.

This conversation must have taken place nearly thirty years ago and Pak Aman Majid or better known as Pak Man Tokyo, left us nearly two decades ago just after the interview, but he had left me a wealth of information of his experience and adventures at sea. And he had introduced me to sailors who must have been such colourful characters plying the Atlantic and the Pacific in their various merchant navy ships as deckhands and carpenters.

It is funny, I reflected very much amused – thousands of miles away from home, these Malay adventurers in the tradition of all Malays, had endearing nicknames for each other; Pak Ehsan addressed Pak Man as Tokyo, for Pak Man worked in a Japanese dockyard as a young apprentise.

Pak Mid was Pak Mid Carpenter, for that was what he did to earn a living on the Merchant Navy ship, there’s Salim Gurkha who jumped ship in the icy waters of Russia but no one could recall why Mat Kambing got his nickname. However, even with a name like that, he was touring the country with a theatre troupe, enchanting his audience with his tango.

It has been a while since I last listened to these animated conversations. I am now desperately putting together a paper on the lives and adventures of some of these sailors and for the last few days, I had been ransacking my archives of tapes and video tapes to help jog my memory. This conversation that I was listening to yesterday was recorded on the UHER, a very bulky and heavy German made recorder, which I had to lug around during assignments. And most of these interviews are still in reel to reel tapes!! For a second I panicked as I couldn’t think where to go to have these converted or copied on to CD or cassettes but suddenly I remembered the old and even bulkier Ferrograph that my husband bought off a friend to keep as a collector’s item. 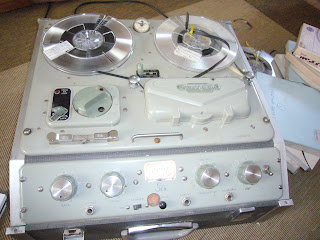 So, much to the amusement of children and cats alike, I dusted the old Ferrograph, lined up the reels and hey, presto! That was how Pak Man and company came to be in my living room yesterday. So, do excuse me if I go quiet for a while as I have some very interesting company in my living room.