He was the classic Mr Clumsy. He tripped all over the place, spilled drinks when he put cups where he thought the table was, and watched in frustration as his brother and friends played football in the field. He tried kicking the ball but almost always missed.

But most worrying was the fact that he was also almost always at the bottom of the class, and never completed his homework. But he was lucky that his teacher was concerned enough to look into the problem. She realised that labeling a child stupid doesn’t really help. She called the parents in for consultation and voiced her concern that perhaps it was his eyesight that was the problem.

A trip to the optician solved the problem and he came back with lenses as thick as the base of a bottle. His performance at school began to improve and tying back his glasses with a rubber band behind his head, he began enjoying football in the field. His future, literally looked brighter, clearer and rosier.

This week, Ummar is one of those who scored 5A’s in the UPSR exams. Tahniah kepada sayang Mak Teh!

Let nothing stop you from achieving success!!

Did you know that (well, I didn’t) Benjamin Britten, one of the most outstanding English composers in the 20th century was commissioned to write a short piece for the Malaya was that emerging as a new independent nation? He visited just before the independence in 1957 but the piece was never used.

But here’s a chance for you to listen to this composition, arranged by ’s own Tazul Tajuddin for the Sinfonietta at the Cadogan Hall on 14th November.

Here’s the rest of the info. See you there!

As a finale to this celebration year The British Malaysian Society is promoting a concert at the Cadogan Hall in London on Wednesday November 14th which both gives a platform to some brilliant young Malaysian musicians living and working in London, and explores some special links with one of UK’s foremost 20th century composers, Benjamin Britten.

Britten visited just before was announced – and was commissioned to write a short piece for the new government. It was never used and thus we can present a Benjamin Britten World Premiere – even if a rather short one. 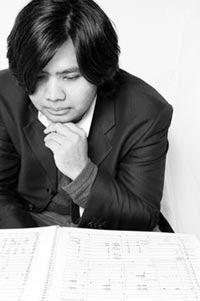 It has been arranged for the London Sinfonietta by Tazul Tajuddin, who has also been specially commissioned to write a work for piano and chamber ensemble – Warna yang Bernada – the Sound of Colour that uses the tonality of gamelan in the piano part to be played by the brilliant young Malaysian pianist – Bobby Chen.

Rounding off the concert are two other Britten works – one his earliest published work, Sinfonietta Op 1, and the much loved Serenade for Tenor, Horn and Strings with James Gilchrist and Michael Thompson taking the solo roles. The London Sinfonietta is conducted by the charismatic French conductor Pierre-André Valade.

We can offer an early bird discount for tickets bought before 14th October – a 10% discount – or there is group discount: 2 tickets free when you buy 10, both for the top two prices. Students can get tickets for a special price of £5.

In the Cadogan Hall all the seats have superb sound and a good view – the doors will be open at the concert starts at and the concert is estimated to be over shortly after tube is a few yards away."

To all my friends, readers, and bloggers celebrating this joyous occasion, have a wonderful day!
But on this day of the Festival of Lights, my thoughts are with the family of a very

When I started life as a journalist, the courts were our training grounds. I was posted to Penang and the Penang magistrates court, (a stone's throw away from our office), was my haunt everyday. In Annamalai, I found a friend. One who explained patiently to a young cub reporter the workings of a case, the do's and don'ts in court reporting. I tagged along with him and Karpal and even Shafie, trying to sniff out important and headline grabbing cases. He was then Karpal's legal assistant. He even consoled me when I sobbed after heart wrenching cases. I followed him around from canteen to court room, covering criminal and sometimes brutal murder cases. And yesterday, Annamalai, my friend, became a victim of one. Everyday, there are stories of murder and violence. I didn't think that one day, I'd be reading about you. How sad. How very sad.

Rest in peace, my dear friend. My condolence to the family.

This is the full story from The Star:

PENANG: A well-known civil lawyer died shortly after a man stabbed him on the back with a long knife in Green Hall.

Datuk S.P. Annamalai (pic), 59, was walking back to his car with clerk S. Nalaaini, 20, when a man suddenly walked up from behind and stabbed him at 6.35pm yesterday.

“I was so stunned that I dropped the files I was carrying. The man then took the blood-soaked knife and swung it at me but missed.

“My boss’ blood splattered all over my blouse. He also swung the knife at another lawyer who happened to be at the car park, but missed before fleeing on a motorcycle ridden by an accomplice,” she said.

She said several lawyers from the Bar Council Legal Aid Centre heard her screams and ran out of the office.

“One of them then helped my boss to his car and rushed him to the GMC,” she said.

Another clerk, G. Selvi, 36, said she was walking to a nearby bus stop when one of the staff at the office alerted her on what had just occurred.

“I believe the assailant was lying in wait for him. I do not know who would want to do this to him as he only handled civil cases. He had not been handling criminal cases for some time.

“He was in a good mood the whole day. He even bought my daughter, seven, a Deepavali dress. This was the first time he had done such a thing in my 16 years of working for him,” she said.

Selvi said her boss’ wife, who was in India to visit relatives, had been informed of his death, adding that she was expected to return to Penang this morning.

Annamalai, the current deputy president of Ramakrishna Ashrama, leaves behind a daughter who is a lawyer in Australia, and two sons who are working in Kuala Lumpur.