Love in the tropics :A young soldier fell in love with a local lass and proposed everyday for over five years until she relented

Over the years, I have met a lot of ex-servicemen from the British Army and spoken to them about their experience in the jungles of Malaya; defending the country against the communists and during the konfrantasi with Indonesia.  Some brought back wonderful memories of friendships which they still treasure, some still recite the pantuns they learnt and memorized behind sandbags, and some brought back wives to be their life long partners.

With love in the air, this being the month for Valentines, I went searching for some couples whose love blossomed in the tropics to see how they have fared in the cooler climes.

Suffice to say, I got more than I bargained for; love stories that defied all odds and worth turning into a Mills & Boons series. Who wouldn’t swoon listening to stories of undying love of a young soldier for an 18 year old Chinese girl to whom he proposed almost everyday until she relented years later, who wouldn’t cry reading jottings of love from someone who couldn’t read or write to her soul mate who saved her from a series of life’s misfortunes, who wouldn’t sympathise with the lass who was beaten with a broom for going out with an ang moh!  Yes, all for the love of an ang moh kui, the red haired devils in uniforms that set many hearts a flutter!

Last week, I travelled up to Colchester, once the capital of Roman Britain, to meet up with the first couple, John and Ruth Fitt, both 71, to hear their love story.

John Fitt joined the army, the Royal Green Jackets, at the age of 15, to see the world.  When he was posted to Penang three years later, his meeting with the long haired and petit Cheng Say Muan, also 18, was only the start of a life long adventure that would take them around the world.

“My friend had asked me to go to this White House restaurant and bar in Penang Road.  That was when I saw her.  Her hair was right down to her bum,” he said pointing to a black and white picture of the lass he now calls Ruth.

“My jaw dropped, my heart was beating so fast and the first time I spoke to her, I asked her to marry me,” he recalled the moment as if it was yesterday.

The gobsmacked lass, whose family owned the restaurant, obviously thought the young soldier was either mad or drunk, for she had met so many drunken Australian and British soldiers who frequented her father’s bar

Everyday since they met, she was bombarded with, “Will you marry me?” She gave in five years later and they were married on 30th May 1967.

“When he was away, he would send piles of letters and every line and every page would be filled with “I love you” said Ruth of her besotted beau. 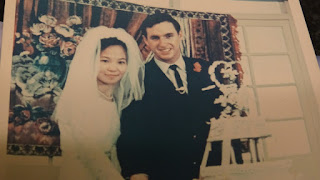 “When you are in love, you are a complete idiot, aren’t you? You tend to do idiotic things!”  John defended as they sat in their sitting room surrounded by memorabilias, souvenirs and pictures; testimonials of their journey in life together.

As the stories unfolded, with John and Ruth trying to tell their own version of the story, each finishing each other’s sentences as it is wont to be with long married couples, John’s admission of being an idiot didn’t stop there.

“He stalked me everywhere.  He bribed trishaw pullers with five sens or ten sens to tell him where Miss Long Hair was,” protested Ruth lovingly while John just smiled coyly remembering his mischiefs.

It would be months before Ruth would agree to go out, and a lot longer before they would hold hands.

“We had to meet secretly, at the cinema for the midnight movies. I would buy the tickets first, gave them to her and we would meet inside the cinema.  One of her sisters would meet her outside and they would walk home,” John continued, adding that just by being nice, he won over the approval of her siblings, her mother and even her grandmother.

However, the biggest hurdle and challenge was her father, a respectable member of the Hainan community on the island, who considered marrying an ang moh as akin to ruining his reputation.

“My father didn’t mind us being friends, but not to marry,” added Ruth whose work as a baby sitter with an Australian couple at the Australian base in Butterworth, helped true love on its course during the turbulent times.

By then, Ruth was offered a place in Australia to do nursing, sponsored by her employers.  When John received orders to be posted to Munster in Germany, she found herself at a crossroads.

Her grandmother found her crying in her room and offered her the best advice that she needed.

“She liked John who was kind and caring, so she advised me to go with John,” said Ruth.

The decision to marry started a conspiracy that would involve more willing sympathisers across several continents.

The day of their marriage at the registration office in George Town and the dinner that followed was one that was tinged with sadness as her father, who wasn’t privy to what was going on, wasn’t there.

“All my siblings, my mother and aunties were there, but not my father.  When my employers left for Australia, my father thought I left with them to do my nursing course.
But we left two weeks later, as husband and wife. I also left letters for my father. The letters would be sent to Australia to my former employers and they would be posted back to my father with the Australian stamps and postmarks!” explained Ruth of the web of conspiracy.

But Ruth knew she needed to tell her father who still thought she was in Australia.  With the help of her mother, they came up with the story that Ruth had accompanied her Australian employers to Germany, where she ‘accidentally” met John again and they had married.  By then she was 23, and although her father was heartbroken, he accepted that explanation. 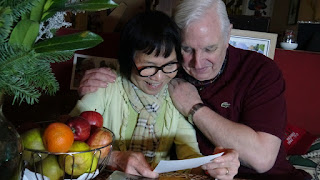 A few years later, the couple went back with their first born, Dan, and her father’s heart melted.  They then had a daughter and Penang is now a favourite destination for the family.

As a final evidence of their devoted life together, the couple took out a cake; the first tier of their wedding cake which had travelled halfway around the world with them and had remained unopened.

The whiff of smell, akin to old cheese, filled the air as they finally got the almost 50 year old cake out of its container and ceremoniously cut it for me to witness. They laughed and giggled; the love smitten 18 year old ang moh soldier and his Malayan bride.