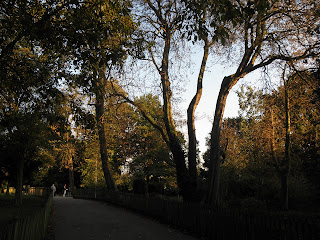 Dear all, alas this is another article that appeared in my column last week..  It is my take on fashion.  I am still bogged down with this and that, more this than that! *sigh!*


For someone so sartorially challenged, an assignment to cover fashion shows can be quite an ordeal.  For a start you've got to understand clothes, if not fashion and not understanding both can be a disaster.  I wear what is comfortable although that could mean a style, if you can call it such, that belongs to yesteryears' wardrobes and should just remain there. Colourwise, I am an autumn kind of person regardless of season.

So you can imagine the kind of challenges that London Fashion Week brings. An invite used to send me into a panic mode of what to wear befitting such a celebrated and much publicised event.  But looking back, I shouldn't have been so worried as apart from the eyes and cameras being trained on to the catwalks, there are many interesting and headline grabbing distractions that no one actually cares what you wear or don't wear.  If the designer is an A list designer such as Zandra Rhodes or Viviene Westwood, then you can be sure that the front row will be filled with the likes of Anna Wintour, Victoria Beckham and of course our very own Datuk Jimmy Choo.  And of course, fashion writers and editors such as Hilary Alexander who can make or break a designer with just her intro.

It was indeed the shoe Guru himself who introduced me to the London Fashion Week where supermodels such as Naomi Campbell and Jodie Kidd would wear his stilletos as they sashayed up and down the catwalk. And tailing him from show to show afforded me a glimpse of life backstage and if I was lucky, I got to be up close and personal with models and even designers.

As LFW celebrated its 25th year and as it drew to a close last weekend, I began reflecting on the first ever fashion show I attended some ten years ago.

It was quite an eye opener to see fashion and how fashion is translated into statements on the catwalks of one of the world's fashion capitals. There are fashion concepts that remain concepts and certainly not for wearing to your local down the road or even to an evening function.  There are fashion statements that are only good for debates in the newspapers and fashion magazines and still not very wearable even to a fancy dress party.  And wearing these statements and concepts are usually models so gaunt and thin you can see their ribs sticking out.  Instead of gliding up and down the catwalks, they stomp unsmiling and not unlike Russian soldiers marching.

Indeed there was quite a furore some years back when models starved themselves to fit into size 00 and tragically died as a result!

And just when you thought you could see some decent curves and flesh back on the catwalks, a row erupted because some people were very much against size 14 models, the argument given was that size 14 models couldn't walk properly!

I remember one year when I was allowed backstage and saw stick-ons being creatively stuck on models to cover strategic places so as not to totally offend.  And that got away as a fashion show.

Anyway, over the years, I began to look forward to attending fashion shows not so much because of the clothes on show but because of the side shows provided by fashionistas who either want to be noticed by the press or model wannabes trying to get the attention of agents. Outrageous and creative in their attires, they go from show to show and whet up the audience's appetite before the real show starts.

This season, I wasn't disappointed.  An apparition in a spiky see through shimmering number sashayed to the front row, only stopping to pose for photographers.  The question on everybody's lips was who was the headturner with bright red lipstick and chestnut shoulder length bob that contrasted sharply with the dark healthy beard framing his face.  He took a seat near Michelle Collins of Destiny's Child and basked in the limelight before the show began.  I gathered enough courage and asked him about his curious sense of fashion.
With Andre J at Bernard Chandran's show

"I love to make people happy.  Its about joy and spreading happiness," says Andre J, a New York based party promoter, who had been on the cover of French Vogue and according to one report had worked with Sex and the City stylist, Patricia Field. 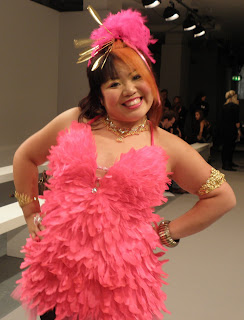 This year's event also saw the presence of another celebrity of The Big Brother fame in a shocking pink attire which made her look like a chicken. I knew I shouldn't have worried about my fashion non-sense. 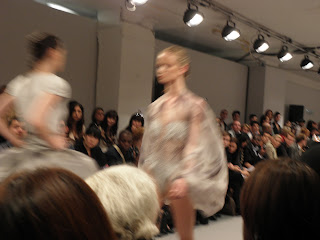 My fashion photography sucks (above) ! But this  (below) is not too bad. 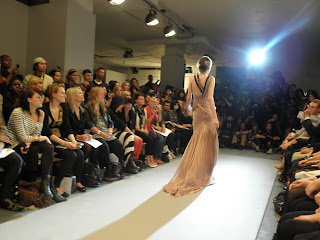 But I love this close-up of a model back stage. What do you think Steven? 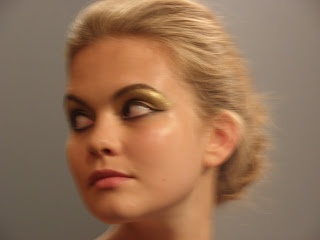