Ever since I came back from Syria, this charming and beautiful country had been preying constantly on my mind. The short and brief visit had been like a dream and could have been a dream had I not been literally touched by the beauty, charm and hospitality of this Middle Eastern country which enjoys the characteristics of the Mediterranean to the west, hemmed in by Lebanon on its western frontiers, Turkey to the north, Iraq to the East , Jordan to the south and Israel to the Southwest - all these close proximity making it such an attractive package but at the same time also by virtue of the close proximity, a whole region that's volatile politically.
It is difficult not to push away the images that we see in the media recently as a result of the wave of protests sweeping the Middle East, but it is difficult too to forget images of Syria that will forever be friendly and full of history and culture. That is something no one can ever take away from anyone that has ever stepped foot on Syrian soil.
My journey to Syria started with a lot of apprehensions. I didn't know the country and my initial skimpy knowledge of the country was coloured by whatever political reports dished out by the western media. Suffice to say, a week was not enough to take in the country so rich in culture and steeped in history. You will want to go back, because that's what Syria does to you. It beckons you to go back.
The journey started early on Boxing Day. The lack of hospitality on Syrian Air was very much compensated by the overwhelming reception throughout the visit - be it from the friendly vendors in the souks of Damascus, the beautiful girls dancing on the top of Aleppo Citadel, the farmer's wife making bread in a small Syrian village or the bedouins in the deserts of Palmyra. Their smiles just broadened when they recognised you as a Malaysian!
With a friend, Zaila Idrus from Iman Travels, and Ali and Nagi tour guides and driver Hassan from Mowiashe travels, the trip was more than I could ever ask for.
Day one in Damascus was planned by Mr Ali - a walking encyclopaedia on things Syrian -
he briefed us before we said goodnight and retired in our comfortable room in Semiramis Hotel. The next morning after a typical Syrian breakfast, we headed for the old city of Damascus , the sights and sounds that has the capacity to transport you to a totally different world, in a different era. 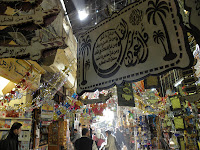 The Hamadiyeh souk of Damascus
The first thing that crossed my mind as I entered one of the many alleys in the souk is that I could easily get lost in the souk that dates back to the Ottoman rule under Sultan Hamid. And what wonderful adventure it would have been dodging mules bearing goods, motorbikes and people doing their shopping. It would have been a welcome respite away from the hustle bustle of modern living - to be sipping tea in one of the caravanserais listening to travellers' tales from the deserts of North Africa.
Alleyways lead to alleyways with merchandise to entice you such as beaded tablecloths, table runners, prayer mats and many, many more. It was simply amazing that you can browse around, pick up a thing or two without any pressure from the vendors. Instead, they offered tea, with no expectations in return.
Ummayad Mosque
We exited the souk into another world that left me in awe of its majestic presence - the Ummayad mosque - one of the oldest and holiest mosques in the world. From a temple built by the Armenians in 1000 BC, it went through several periods under the Romans, the Christians and finally the Muslims - making it the interfaith place of worship - where a shrine said to contain the head of John the Baptist or Nabi Yahya to the Muslims. The building was once shared by both Muslims and Christians as a place of worship.
Standing on the vast courtyard, I took in the three minarets, the Minaret of the Bride, the first to be built, the Minaret of Prophet Isa, believed to be the place where the prophet will descend from on the Day of Judgment and the Minaret of Qaitbay. I did my prayers in the vast opulence of the Ummayad before leaving for the tomb of Saladin which stands in a small garden nearby. There was already an orderly queue of Muslims and non-Muslims entering the shrine to pay respects to one of the greatest Muslim warriors. Standing there before the tomb was one of the most emotional moments during the visit - a prelude to things and places connected to the great Saladin, such as the Saladin Castle and Krac de Chevalier. But that will come later.
Damascus is not a city to do in a day but I suspect that a month wont be enough as well. But we did as best as we could, taking in the enchanting Hamam and the hospitality it has to offer. My only regret is that the day we visited the Hamam it was not a day for women. After that we went on a long search of shrines and ended up in Bāb Saghīr Cemetery which houses among others the shrines of Umm Kulthum, daughter of Ali and Fatimah, granddaughter of the Prophet pbuh and that of the Bilal. Again, tears welled up in my eyes as I offered prayers to the Bilal. I couldn't believe that I was there. Shrines are popular places for Shiah tourists who come from far and wide on a pilgrimage of a lifetime. Young and old were carried and piggybacked to enter shrines and women and men wailed out loudly.
As the sun was about to set, Hassan sped towards Mount Qassion where you can feast your eyes on the whole of Damascus as the sun goes down. There are stalls with middle eastern music from transistor radios and hot teas are endlessly poured as the temperature dipped, making me yearn for my bed. According to legend the Prophet Mohammad pbuh stood there and was asked why he didn't go to the city. His reply was, he didn't want to go to paradise twice. Wallahualam. But indeed watching the colour changing over the Middle eastern skies. I was mesmerised.
Surrealistic Syria - Part 2
To Palmyra, Hom, Hama and Aleppo