Memorable memories are made of these 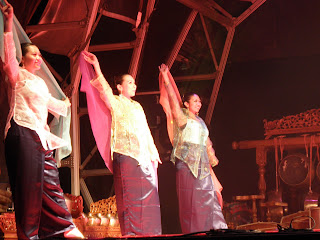 Dancers of Sri Bulan troupe
TOO many memorable images of events from this week are playing like a slide show in my mind — those that I had captured in my camera as well as moments I did not but which will forever be etched in my memory. A lot has happened in the past week that keeps tugging at my heartstrings and reminding me of home with a certain surge of patriotism and nostalgia.

On-going Hari Raya open houses, a belated Merdeka celebration and the climax of the Malaysian Kitchen campaign fervently promoting Malaysian food at a pasar malam that momentarily transformed Trafalgar Square: All served to make one yearn for home but at the same time be grateful that home can actually come to you.

Last Sunday, Malaysians in the UK had a very belated Merdeka Day celebration at the usual venue, the sprawling grounds of the Tun Abdul Razak Rubber Research Institute in Brickendonbury. It was made all the more special when the King and Queen of Malaysia graced the occasion with their presence.
The sun came out, after an awful day before that. At close quarters, I noticed how young and dashing the royal couple looked.

There was a time when our kings and queens were old, but that, I believe, was because I was much younger then. The Queen brought back memories of the time I had spent with her mother when we were in school. That must have been 40 years ago. Time certainly has wings. I watched the dancers on stage, as I emceed the show (I usually do when they perform in London, or elsewhere in Europe). These talented dancers, my daughter included, were mostly born and bred in London. I had witnessed their development as they took their first faltering zapin and inang steps under the watchful eye of their dedicated dance teacher Khalid Din. Their love for traditional Malay dances is amazing. They bravely danced on in the cold blustery winds at the pasar malam in Trafalgar Square the night before. But they persevered, with smiles on their faces, urged on by the appreciative crowd which didn’t seem to get enough.

I remember persuading my daughter to join the dance class as I myself had been denied such an opportunity.
At the convent school, we were only taught the Irish jig and the Scottish dance. So, I had placed my hopes on my daughter. Her first Ulit Mayang performance almost reduced me to tears. And now in true 1Malaysia spirit, she can even do the Indian dance, which she did when the Sri Bulan Dance Troupe was invited to perform in Croatia. They have really been a true cultural ambassador for Malaysia.

Enjoying the sun and the celebratory mood, children in bright baju Melayu and baju kurung ran around while waiting for their turn to perform the dikir barat. They waved little flags in their hands and some even attempted a sword fight with these. But once on stage, they behaved very well, swaying and waving the flags on cue.

One familiar figure who would turn up without fail at the carnival was there — a shadow of his old self. Every year I see him, a lone figure, walking around with a basket of fruit or a packet of sweets to distribute to the children.
Last year, he took to the stage and attempted a song. This year, he looked very lost. I have documented him in my mind and in my memory card for I have followed his development for a while now.

He was the brave young man who wanted to cycle around the world but love stopped him in his tracks in London.

The year the late Tunku Abdul Rahman came to negotiate Malaya’s independence, he was there with a group of friends to meet the first Prime Minister to be. He has a picture to prove it.

As the carnival came to a close, he cut a forlorn figure walking back to his awaiting transport.


It was nice to see the stand-up comedian making a special appearance. I had met him when he came with Sheila Majid to Ronny Scotts some years ago. We enjoyed his comic act with his sidekick Johan but it was his last performance that did it for me. Waving the little flag, he invited us to be on our feet and to sing along the patriotic song Setia, and as I did so, stumbling and choking over the lyrics, the dam burst.

It’s funny how little things would trigger off memories. As I said, the night before was the hugely successful pasar malam at Trafalgar Square to promote Malaysian food.


The rain in the morning threatened to dampen the spirit but even as the temperature dipped further, it failed to stop people from converging in the square. The 20 or so foodstall owners were out of food by 8am. One stall was selling peanuts left over from the nasi lemak. Everyone had expected a no-show as the weather was so horrible.

The queue for Puji-Puji’s satay was so long that by the time you got to the front there was not a stick of satay left! Needless to say, a lot of people were disappointed, but the cultural performances by Sri Bulan and Nusantara compensated for this. The gamelan and traditional Malay music filled the air.


Girls and boys carrying baskets of red hibiscus distributed them to visitors who pinned them to their collars or pockets or tucked them behind the ears. What a beautiful sight. It triggered memories of what my friend, the late Datin Peggy Taylor, once told me. Tunku, a very close friend of hers, had confided about the choice of the red hibiscus as a national flower. Why the hibiscus? Peggy had asked. It wilted very quickly. To this came the retort that she mimicked very well: “What’s the probleeeemmm?” Indeed, what’s the problem? I wore mine proudly on my scarf when I went to the carnival as did thousands of others.

These are what memories are made of.


Read more: I’M EVERY WOMAN: Memories are made of these http://www.nst.com.my/nst/articles/I__8217_MEVERYWOMAN_Memoriesaremadeofthese/Article#ixzz1175tNF6x
Scribbled by Kak Teh at 2:29 pm 19 comments: