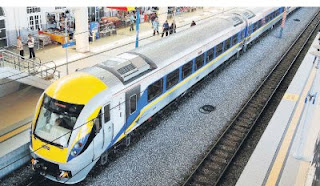 IN a few minutes, the 1235 from Paddington will leave for Paignton, and that is somewhere in the south west of England. I was supposed to be on the 10.35 but as fate would have it, I missed it, not because I was late in purchasing the ticket, but because I was too early.

I had bought the tickets a day earlier as I didn't want the hassle of queuing up. But Mr Murphy had to be right, as always. If things want to go wrong, it will go wrong, even the best laid plans.

The tickets I bought from the machine was apparently valid only for one day and I was turned back at the ticket barrier to join the long queue of backpackers and families with children escaping London to enjoy the last few days of summer.

I have always loved train journeys as they give me the luxury of being with myself and my thoughts.

I am now on the First Great Western train, one of Britain's national train networks. It is fascinating to watch the English countryside whiz past my window. This being a weekend, people are enjoying barbecues with their friends out in the back garden. The English, they do love their gardens: Neatly trimmed hedges with beautiful flower beds and hanging baskets in a riot of summer colours.

The suburbs soon make way for vast green fields - cows grazing and sheep looking like small cotton balls, dot the vast fields now turning brown after quite a harsh summer. I note that some of the cows are sitting down. It will rain, says my husband, if cows sit down. And true enough, rain starts pelting on the windows as we criss-cross along the British countryside. 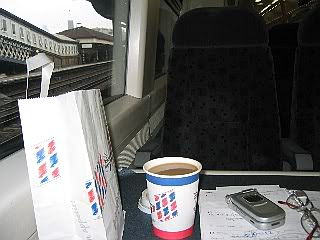 Being a creature of habit, I never leave the station without two - not one - mushroom parcels and a cup of piping hot coffee from Delice de France. And after drowning my sorrows of losing the price of one train ticket, in what inevitably became cold coffee, I allow my thoughts to turn to Mak.

Mak too loved train journeys. When we were young, train journeys during school holidays were a treat. We'd talk about nothing else in school about the impending adventure from Yan to Johor Baru.

We used to take train journeys from Alor Setar to Johor where Kak and Abang were stationed. An announcement of a train journey was welcomed with sighs of relief as it meant not the usual trips to Penang or Pantai Merdeka.

From the first whisper of the holiday plans, we spent sleepless nights, too excited to do anything else. And Mak would start packing things she'd bring to her firstborn who had followed her husband to what could only be considered as the furthest point south from where we were in Kedah. There would be food and things she thought her eldest daughter was going without. Mothers are like that. Now I understand.

But most importantly, I remember how she'd wake up in the morning and prepare food for us that would last us through the long journey from north to the south of the peninsula. There'd be rice and chicken dishes carefully packed in tiffin carriers and drinks in flasks and towel-wrapped containers. Boiled eggs were almost mandatory - we never left on long journeys without boiled eggs.

I remember most the early morning drive from Yan to Alor Setar where we'd patiently wait for the train and then the short ride to Bukit Mertajam. Now, this is the bit which I could never forget. Whether this part of my memory had been exaggerated by time gone by, I don't know. But I remember the rush - bags, tiffin carriers and more bags up the overhead bridge to the waiting southward bound train. It seemed to me than that the train would only stop for five minutes and no more!

Then the search for seats. By then most coaches would be full of tired soldiers on home leave, other families also going on holidays, screaming babies in sarong hammocks suspended from the ceiling of the train... it was chaotic.

The highlight of the train journey must be the stop in Ipoh when we were stirred from our sleep by sales pitches of food vendors plying up and down the platform skillfully balancing their food stuff on their heads.

Never mind the food Mak had painfully prepared for us, buying from the vendors was more exciting.

As we pull into Pewsey, a small village in Wiltshire with its small quaint station, I remember the train journeys criss-crossing Europe to as far as Budapest, journeys along the beautiful Rhine with chateaux and castles dotting the mesmerising landscapes that usually brings me back again to those childhood days reading about princesses in captivities and charming princes coming to their rescue.

Oh well, the train has stopped and so has the rain. But beautiful memories of train journeys linger on.

Those article first appeared in my column in NST here.
Scribbled by Kak Teh at 9:55 am 30 comments: