Love in the tropics: She was just 17, and I fell in love with her!

“Well, she was just 17 and you know what I mean, and the way she looks…”so goes the song by the Fab Four from Liverpool.  It was the sixties, The Beatles and Cliff Richard were all the rave.  This song could have been written specially for Sally and Malcolm Moore, the couple who met in the queue buying tickets for the movie “Summer Holidays”. Sally Lee Sing Neo was 17 going on 21 and Malcolm Moore was the good looking soldier in uniform.  You could almost hear on cue, the theme song for a blockbuster movie - the one with lots of thorns strewn along their path.  Smooth it wasn’t.

He was an ang moh and the vivacious Methodist school girl came from a Peranakan family whose parents, family members, aunts and uncles, would rally around at a flick of a fan, to lock her up if possible.

It was in 1962 in Malacca that they first set eyes on each other, they told me almost in unison. And yes, it was love at first sight too, they chorused, with Malcolm nodding in agreement with dates and events that Sally narrated, her 72-year old eyes alive and dancing as memories flooded back when we met in their cosy home in the village of Rossington in Doncaster recently.

The living room of their smart detached house was decorated with pictures; old and new, colour and black and white, Malaya and England.  These are memories of their life together since their meeting on that fateful day at the Cathay cinema in Malacca.

Malcolm was a corporal with the King’s Own Yorkshire Light Infantry (KOYLI), when he was posted to Malacca at the age of 20. He is now 75.

“When I saw her, I knew that she was the one,” said Malcolm, the tattoo on his arms bearing a female name seemed to be a minor problem that he thought could be erased in time.

“We started going out,” continued Sally whose escape plans involved logistics, precision planning as well as physique and agility of a commando for the attempts of rendezvous, given the opposition from family members.

“I had to sneak out otherwise I would get into trouble,” explained Sally.

As was normal in a Peranakan family and extended family, Sally slept with her cousin sisters in one room.  From the two storey house, she would climb out of the window when they were asleep and they would go somewhere in town or the beach.

She soon exhausted all the well tried and tested reasons for staying out, such as sleeping over at a friend’s place and soon enough family members found out.  Although no one was pointing fingers at the brother who caught them kissing, it must have been quite a relief that their trysts were discovered and their intentions to get married could be discussed openly.

However, it was the threats that came first; especially from the uncle who lived next door.

“When he found out he forbade me from going out.  He said they would not allow me to marry an Englishman,” she added saying that she had to kneel in front of him while he did the talking, warning her of the bleak outlook of life without rice in England.

“He said I should try to eat potatoes for a month and being stubborn, I said yes, I would,” she said laughingly, living up to her reputation as the most stubborn and naughtiest member of the family.

Sally’s mother threatened to put her in a home for naughty children and when that went unheeded, hit her with a broom when she came back from an outing with Malcolm.

“She said ‘Lu kasi malu gua' (you have embarrassed me!)” hitting me as she said so. But I just walked past her.

It wasn’t just the parents and family members who were set to stop the marriage of the young couple. Marriage between soldiers and the locals were frowned upon by the army.

Before a posting to Borneo, Malcolm proposed. Sally was interviewed by the army and she was kept under surveillance.

To ask for her hand, Malcolm had to see her parents and uncle.

It was not unlike a job interview for Malcolm had had to answer a barrage of questions from the uncle who asked whether Sally would be treated as a servant once they were back in England.  Malcolm said no and he was made to promise that he would look after his young bride to be.

The happy couple married on 16th Nov 1963 and their son was later born in May in Terendak Camp. 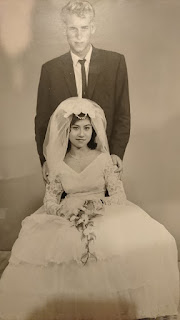 It wasn’t too long when Malcolm brought back his young family to England.  Sally recalled how unexpected it was with the hugging and kissing from strangers.

“The weather was a shock. We arrived at the Brice Norton airport at six in the morning. I didn’t have a coat and just a cardigan with a baby in my arms and I was expecting another one. I was 18,” said Sally of the September weather, adding that she used to cry in the nights.  She was missing her family AND rice. Her mother in law went out of the way to find rice and curry, but it was one with fruit and raisins.  But gradually she found friends who were in a similar situation having uprooted themselves to be with their soldier husbands.

Sally was lucky that in 1966 she was back in Malaysia  as Malcolm was posted back to the same camp he left two years before.  Sally then went back as a British soldier’s wife. 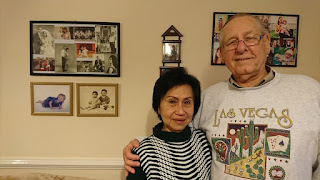 She brought her two small children to visit their grandparents and relatives and soon they won the affection of the family.

“After that I could do no wrong in the eyes of the uncle,” quipped in Malcolm.

When Malcolm left the army in 1971, he worked as a mining welder and later went to Hong Kong to work for a security firm as well as in the police force.  They lived in Hong Kong for 21 years before coming back to Doncaster.