And I was there , too

We were all there together after the wedding. Right there in the living room where we usually congregate – before meals, during meals and after meals. The kids were running around as usual, some people were still at the table, with their seconds or probably thirds. And there’s the usual banter. I was there. I am positive of that.

I had missed the wedding. But I heard about the tears of joy at the mosque during the akad. Within hours, I saw the pictures – all one hundred and something of them. We shared them through YM and Am sent me a link to his online photo album. And I could see what I missed. I could see the fun and joy reflected on the faces of my sisters and brothers and nieces and nephews. Close cousins came all the way from Bukit Pinang to help carry the hantaran. I felt a certain kind of sadness as I hate missing family occassions such as this but such is life when you choose to be away.

And then, some bright spark came up with the bright idea. Why not use the webcam when they were all gathering later for dinner later that night? Hmmm, why not? And so, that was how I got to be there at the family gathering that night. Thanks to the internet and technology!

After the initial problems of not getting the picture and sound quality right, adjusting myself right into the frame, we webcammed!!!! The children fought to be in front of the camera, and there were times only certain parts of someone’s body strayed into the screen, the occassional shot of someone's nostrils and the constant.. . “Dengark dak? dengark dak? Dia tak dengark kut!” On my side, children too fought to be seen, husband held his cats to the camera...what a scene!

At one point, little Hilman pushed his way to the front and said,”Mak Teh nyanyi, Mak Teh! Nyanyi lagu Siti!”

Now, my little nephews think the world of me and if you were to tell them that their Mak Teh can’t walk on water, they’d probably beat you up. So, I struggled with some verses of Siti’s but admitted defeat and offered Alleycats’ “Hingga Akhir Nanti” instead as I am more than familiar with that one. So there I was in the middle of the afternoon in springtime London belting away the song to my little fans some thousands of miles away. Aaaah, such is techology! I had to do this or I won’t have any peace when speaking to my Mak. The first time we tried to webcam with Mak, Mak wasn’t well and I really wanted to see Mak for myself to see the extent of her condition. They set up the internet connection and the webcam, and carried Mak upstairs.

I was nervous ‘cos I wasn’t really ready to see Mak in that condition. But suddenly the frame went blank. Apparently little Nasri had pulled out the plugs! Hmmm

This time, I saw Mak doing the slow walk to the computer, unaided! Alhamdulillah. I felt my chest tightening and worried about how my voice would sound.I wanted to be as cheerful as possible! And she finally sat there, chatting to me as she usually does, while folding the clothes from the washing line. There was still the annoying delay, but this was the best technology could offer and I was thankful for that. She could hear me on the speaker. Telephone conversations are now impossible as she is going a little hard of hearing.
I was there 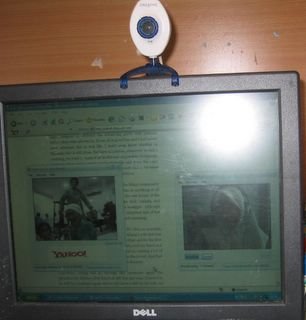 And then out of the blue, she got up and unsteadily came straight to the screen and so, so close to the camera that I could see her tired eyes and all the wrinkles on her face. I had missed not looking after her and the feeling of guilt took over. I just had to close my eyes and try to stem the flow of hot tears down the cheeks. I could hear her calling out my name, as she usually did to wake me up for revision during exams or for morning prayers. When I opened them I realised that she had reached out to touch my face on the screen, not quite believing that I was not there, with them. So near and yet so far.

So, that was how I got to be there with them that night, the night of the wedding. I even got to speak to my new sister in law and got to see Abang’s endless smiles. And I got to see that look on Mak’s face – the look that says everything when she knew all her children were there with her. Even if it was for a little while.
Scribbled by Kak Teh at 8:34 pm

tak dak gambarq pengantin ke? i kinda miss kenduris in Msia. Though when I was there I complained abt having to attend what seemed to be an endless kenduris esp during the school hols.

sedih gak, my family is not into IT kalau tak boleh gak I sembang2 with my Mak

Your last few para brought tears to my eyes, Kak Teh !

The magic of technology, kan.

I love technology. I love it.

MA, sedihkan bila namak tak boleh sentuh, tak boleh peluk.
Mama Irma, doakan we all boleh berjumpa lagi, even if for a short while.
Bergen, yes, I love it too, esp. when it works!

lovely to be able to see them even from such a distance, isn't it, kak teh? so close yet so far away, true. but better to have some contact than not at all. :)

uih menangis I di buatnya Kak Teh.
I feel you. Faham sangat.

azjie, memanglah sedih. Where about are u in Germany. Ada afriend of mine - Maknenek - i think u have visited her blog.
may, it is better than imagining and also as i cant talk to her on the phone, this is the best option.
mar and karina, I know both of you pun jauh dari family. We are all in the same boat.

ala mak sedihnya entry ni...i think i might wanna consider webcamming with my mom too.

Even if we didn't have the technology, you are ALWAYS with us. ALL THE TIME!

So near yet so far. You can see but u cannot touch. Nice to hold, if broken considered sold - the webcam, I mean.:)

Yes thanks to the technology, we all could share our feelings here.

U brought tears to my eyes. Alhamdullilah kak teh masih ada mak...

If only I can just have a second to hug arwah my mom..

Pak Ngah Musa, the Malay sailor you once met in Liverpool is back in Kuala Terengganu for a holiday. Three of his children and 2 grandchildren will be joining him on 18 April,arriving at KLIA on that day, first time for them to be in Malaysia. Would be nice if you could get AG or Bustaman to get in touch with him because he is part of Terengganu History. He is now staying with his younger brother at Losong Hj. Mat Zin and can be contacted at 096691818

mak teh,
u make me cry, in the middle of the nite,while reading this.

nazrah, do it..hilang rindu.
anedra -are u sure? hehe! Been looking at old video tapes again! that is how much i missed home.
OSH,one day it will be possible to touch pulak!

i hope u didny cry when it all happened. so happy but yet so sedih kan?

Kak Teh, that was so meaningful, no doubt. Aren't we all lucky to have technology bridging the distance? Glad that you had a chance to 'join' your family at such a momentous time.

ok since almost everyone is into pantun-ing and stuff i want oso...

hehehe so how's my first attempt at berpantun? Hancusss i know.... heheheh... but more seriously... ur every mention of ur Mak makes me gembeng all over again... I pray that she is stays under the protection and blessing of Allah always Kak teh...

Kak teh, memang sedih reading this entry. Webcammed has been a must activity during weekend to see my lil man and family. Feel so good to see and to talk.