All the best Zahra and Godspeed! 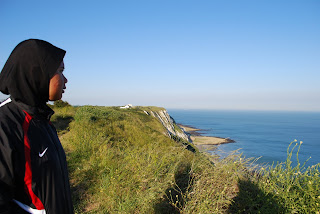 She stood on top of the famous white cliff of Dover, her eyes looking across the vast volume of water, trying to make out her destination. The lighthouse of Calais was not visible due to the haze at that time of the evening, but she knew that when it appears in the horizon as she makes the solo marathon swim tomorrow, it will be a welcome sight. And when her feet touches the sand, she will know that she has made it.

Zahra Masoumah is a young lass, barely eighteen but her determination to conquer the Channel following the strides of Malik and Lennard Lee, is almost single minded, almost unshakeable.

The water, she admits, is cold and there were nights when she stayed up worrying whether she could make it. The distance she can handle. From Shakespeare Beach, where Malik and Lennard began their swim, to Calais is roughly about 35 km. She had done 45 kilometers before, but in warmer waters, and in more familiar surroundings. But the currents can be cruel. I had personally seen Malik struggling, with success, against strong currents, when he was swimming in Lake Zurich. I was accompanying him in a boat (not a swimmer myself) and for almost three hours, I swear, he was in the same spot. The currents kept pushing him back to the same place.

My visit to see the family in Dover last week was almost a deja vous. I remember the trips in 2003, everytime it was announced that Malik was going to make the swim. And then, several times the swim was aborted due to bad weather.

We received news yesterday that Zahra is to swim at 5am on 1 July. And Insyaallah, she will make it.

Home for Zahra and her family for the past one month is a three bedroom caravan at a beautiful caravan site, Varne Ridge, overlooking the Channel. It had also been home to hundreds of cross channel swimmers from all over the world, among them, Lennard.

When I arrived, Zahra and her sister, also Zahra, were helping their mother make jemput-jemput for afternoon tea. The boys, being boys, were running up and down, enjoying the unusual sunshine. The smell of jemput-jemput in the frying pan, the squeels of laughter from the boys and the heat – its almost like Malaysia. But it is not. Just several meters away, is the vast volume of water where Zahra will spend a good part of the day tomorrow, swimming with all her might.

Unlike Malik, her swim will start at 5 am. If we can make it to Shakespeare Beach, we can witness the start as she jumps off the boat, swim to the 400 meters away from the shore and start her feat when she hears or sees the signal.

I was at Shakespeare Beach in 2003, at one am to be exact. The area leading down to the beach is private property but somehow, we got permission and thus made our way down to the beach, in pitch darkness. The white cliff of Dover stood hovering menacingly. The doves and seagulls were nowhere to be seen. It was eerily quiet, except of course, when the early morning was broken by shouts of Malaysia Boleh by the Malik’s handful supporters.

But what I remember too well is also the sandflies. As soon as my cameraman switched on the lights and the camera, they came in thousands, if not millions.

But another sight that remained with me until now is the appearance of three small boats in the dark. Then Malik jumped. Three hoots and away he went; soon he was just a dot bobbing up and down in the waters.

Insyaallah, I will wait at Dover Harbour for news of her success, and I will wait there too for her return. For now, let us wish Zahra all the best in her endeavour. May Allah keep her safe all the way and back.
Scribbled by Kak Teh at 5:44 pm

A namesake of yours is attempting a very challenging feat. My prayers are for her to make it safely.

Looking forward to your first-hand account of the achievement.

All the best to Zahra!

May Allah give you strength and fortitude to face this upcoming challenge, Zahra.

I'll be making my way towards the east early tomorrow morning too. But only as far as Ashford, for a meeting @ site :(

All the very best to the young lass.

safe crossing & all the best, zahra!

All the best for the spunky lass... and the one who's going to regale us all with her account of the feat.. :)

Go Zahra go! My best wishes to her.

Good luck to zahra!hmm, can't imagine swimming in the same spot for 3 hrs!

I wish she will get what she wished for. And she'll be able to do it without much difficulty. Good luck!

wow! it's such an honour to witness first hand, but it's also an honour to hear/read it first from the witness :)
good luck zahra...

Good luck! Insyallah success will be hers!

And kakteh keep warm! And dry!

zahra will make it and make us proud, insyaallah

Kak Teh,
She is prepared for the event and let us pray that the weather will be kind to her. May success be with her.

Kak Teh: I can't hold back my tears when I read about her in the newspapers today. I remember clearly what it is like to want something so badly, only to have it thwart by forces beyond one's control. Am keeping my fingers crossed for her. I know deep down that she will try again.

I've been traveling these past few weeks and heard my name being being bandied about in your hallowed pages :).

Ah, just left a comment at Atuk's.. I didn't know about his wonderful daughters. Saw the Sat. June 13th afternoon matinee with my 16 year-old boy and we were both enchanted to say the least. I really wanted to see A Doll's House and Hamlet (Gillian Anderson, Jude Law respectively) too but fulus tidak mengizinkan laa ha ha.

Anyway, I'm back in the hole where I crawled out from - my regular rust bucket in croc infested rivers of Kalimantan Timur.. Hope your Hay Fever's gotten better, Kak.

And yes, way to go Zahra - dying for an update soon!

Kak Teh - I would love to meet Zahra! Hats off to this brave girl!