Let’s say I’ve been cybernating. Its cold, still very, very cold and I had had enough food over Christmas and New Year to cybernate until there is enough sunshine out there to get out. I had been away from work a week before Christmas and it was only yesterday that I dragged myself out and braved the early morning hailstones to earn myself and the cats a decent meal.

This hiatus and hence the reluctance to update my blog in a way reflect my attempt to cling on to 2005 and stop the march of time. As the countdown began on TV to herald in the new year, I buried myself under the duvet and fell into deep sleep and woke up the following morning as if the new year never came. But who am I kidding, eh? During the last few days of 2005, some people did come over to remind me how fast time has zoomed past us.

For four wonderful days, I was in the company of my loved ones from back home. My niece Anedra and her husband arrived with their entourage, which included her parents (my sister and brother in law), her sister and her two little children to make sure that – hey – these are your grand nephews!! At the earliest opportunity, I pulled little Nasar aside and told him to take it easy when calling out my name in public – Tok Teh doesn’t sound very glamorous, you know.

For four wonderful and fun packed days, we were camped at Holiday Villa London, occupying three family suites although our house was just a stone’s throw away. This was just to ensure that we did not miss a single minute being away from each other.
the cousins 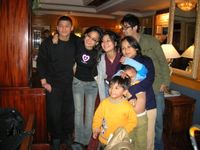 These four days were perhaps the longest I had spent with my grand nephews and many a times I caught myself sighing when I had flashbacks of those days not too long ago that I was minding Anedra, changing her nappies and putting her to sleep. I couldn’t wait for the weekends to come so that I could rush back and be with her. Then, all to soon, it was a tearful goodbye at the airport when she left for Kansas when her father went there to further his studies. And more fast forwards later, she was back here in the UK pursuing her own studies AND babysitting my children. She was always available when I had assignments in Germany and in Budapest, I could enjoy a full week away knowing that they were in capable hands. And all too soon, this winter, I was minding her children, changing their nappies and wiping their noses. Where did time go?

Wasn’t it not too long ago that Kak Cik and I were wetting ourselves suppressing our laughter in the middle of the night at her grandmother’s house in Pilah, as we struggled in the dark to change her nappies? Kak Cik had unwittingly plunged the safety pin right into my thigh. There was immediate realisation that there’s a vast difference between real life babies and paper dolls that Kak Cik and I used to play with.
Anedra & Baby N walking tall in Model Village 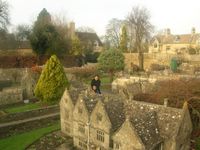 And all too soon too – there I was in a hotel room in Paris, sobbing into the telephone on Anedra’s wedding day because I couldn’t be there on her special day. Again, I was away on assignment.

These last few days, I kept looking at the photographs that we had taken in Stratford, Cotswold and Oxford capturing the fun moments that we had. And there were also those documenting the havoc in our hotel rooms as the cousins enjoyed every precious minute together. And during the last few days too, it dawned on me, and my aching bones that it isn’t easy anymore dashing across the room after a spritely three year old, or answering clever questions from an inquisitive five year old.
cousins 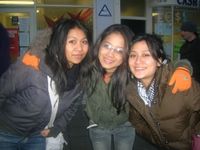 Thank you Anedra for coming over and repackaging all those years in the last four days of 2005. 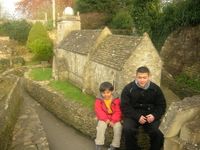 I am now officially out of cybernation.

that was beautiful, thanks for sharing. happy new year kak teh, welcome to 2006!

Now, let's march into 2006 with full zests and vigour.

The imprint of past memories, the ones snug in the hinterland of the heart, is what really brought us to TODAY. Lovely.

We love you TokTeh! And have been longing to return as soon as we touched down at KLIA!

*one is saying - KITA sayanglah kat Oteh tu! you know who lah!*

Phew...I thought I'd still be reading about the two ronnies until spring comes !

Welcome back kak teh...Same lah mcm what MA said. I thought I'd forever be seeing the two ronnies

Cherish every moments... Bila dah lama di rantauan, having the family gather together is such great fun and memorable... Just can't wait for that to happen when I fly back in APril and the family coming over in December.

Love the Two Ronnies! Classic comedy all the way!

would love to meet you soon kakteh, i'm quite bored.

Hi Kak Teh, you better not use the weather not to drag yourself to meet up with me. I've landed in London today & I have things for you! I'll call when everything is confirmed, most probably tuesday evening as planned.

Kak Teh.. what great way to end 2005! That spells a lovely mayhem in the suite rooms. And time surely flies.. especially when landmarked by marriages and baby wipes.
Love your entry to the hilt!

As usual kak teh your writing made me go through a mixture of emotions, happiness, nostalgia, sadness, and so much more . You post once in a while but it's enough to keep me happy and satisfied till your next one . Why don't you ever fly down to Pakistan ? It will be such a pleasure to meet you . please, please consider the request and inviitation ... :)

Welcome back to cyberspace. Family is a wonderful blessing from God. Now your album of memories must be packed choc-a-block.

may - thanks - happy 2006 to you too.
YB OSH, yes - Forward march!!
noni,pls dont - nanti jadi macam incredible hulk!
tenah - yes - we are indeed - Alhamdulillah.
Jane - I know u are blessed with lovely siblings and relatives too -
anedra...kita pun sayaaaaaaaaaang!!

MA - two ronnies pun okay whaaaaaaaat?
Marlinda - thanks - am back sebab kalautidak langsung tak menulis.
mami - i hope u have a wonderful reunion and gatherings with yr family.
ewok - will call and lets make it soon!
pu1pu3 - ehehe - not even a snowstorm can stop me..pls call.
count - u shd have seen the mess!
Beautiful stranger - hey!! that is wonderful - sure i will keep that in ind - who knows!

Lydia - it is indeed choc-a bloc - i didnt know where to start!

any chance of sharing the wonderful wonerderful photo's of Anedra's visit there???

Happy new year Kak Teh. Beautiful story and surely time do flies so quickly. Me too hybernated in the duvett after Christmas day to new year. Missed all the boxing day and year end sale.

ee.... bestnyer dapat jumpa sedara-mara. Most people don't wanna come to Denmark, especially after they hear that I am 5 hours away from Copenhagen. Sob.

I thought I sent you 3 reminders of 2006, in various sizes so that you should no longer forget the dates. It seems that 3 are not enough, *note into diary - next year send 6* :-)

Happy New Year Kak Teh, it is godd to have you come out of hibernation.

Short and sweet! That's how I can imagine the reunion to be here:)

** tumpang lalu ye, eerr kak teh babe nak link yrs to mine ken or not?

babe to ailin...: hey..i'm workin wt an infamous danish company in m'sia. hmmm i haf m'sian friends who has been transferred there too. very conservative way of living ppl there in cph eh.

Cybernation or not, you always manage to cook up some good stories each time!

Anedra is sure lucky to have you as an aunt who is so close almost like a mum!

Ummi- feast your eyes on those and many more at anedra's.
AM - It was just nice and we managed to do everything in 4 days.
ailin - well - u can always come over here, kan?
AUntyN - yes -, I know but they were delayed in the post, remember? sebab tu lah!
Apples4me - yes - it was.
superfluous babe - yes - but i cant get to yr blog.
DITH - I am lucky too to be blessed with such relatives. Thanks.

kak teh, planning to. You better get ready to be my chaperone to the embassy... kalau jadilah. ahaks!

We missed you loads during your "cybernation" and looked very much forward to your news.

As usual your entry stirs up many a emotion. Its always SO nice to see people you love and have them visit you at a time when the weather is cold and overbearing.

ailin, insyallah - kalau setakat chaperone tu boleh.
lifebloom - it was a much needed rest - and added on by kemalasan yang teramat sangat - hehe!
anim - yes Pilah is my sister's mother in law is - its Tanjung Ipoh, i think.