The power of social networking - the Asyraf Haziq Experience

THE video clip on YouTube showing Mohd Asyraf Haziq, 20, bleeding and in shock after an attack during one of London's worst riots, touched so many people.
There was an outpouring of sympathy which then turned into anger when his so-called saviours, apparently from the same gang who attacked him, ransacked his backpack and took away his PSP. 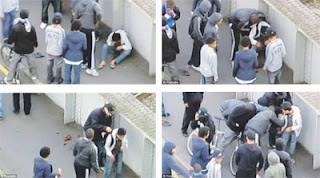 He cut a forlorn figure as he staggered home while the gang went off with their spoils of his STG60 (RM293) bicycle, a hand phone and his PSP.
They missed his wallet in his back pocket. The one who ransacked his backpack, disdainfully threw away an empty plastic container that Asyraf had brought to pack food for his sahur (pre-dawn meal).
Asyraf, a first-year Association of Chartered Certified Accountant (ACCA) student and a Mara scholar studying at Kaplan Financial College in nearby Tower Hill, was cycling with a friend to break fast at a friend's house when they were attacked.
His friend managed to cycle away, thinking Asyraf would do the same.
Unknown to him and his attackers, the incident was filmed by someone from a nearby building and it was posted on YouTube and repeated many times on the British Broadcasting Corporation (BBC) and Sky TV.
This one-minute-15-second video clip was ironically as powerful as the tweets and SMSes that the likes of his perpetrators had employed to plan their mindless attacks and carnage throughout London and cities across Britain.
So powerful was it that tweeters got together to collect money to replace the things that he had lost, and a search was launched for the person who recorded the dastardly act on a helpless student.
Someone on my Facebook had contacted me about his identity. And apparently, he, too, was making efforts to collect money to donate to the student, who is now nursing a broken jaw as he awaits surgery at the Royal London Hospital.
Asyraf, on his hospital bed, was still oblivious to the publicity and attention his misfortune had caused.
With his lower jaw wired and a swollen right cheek where he suffered another broken bone, Asyraf looked vulnerable but a far better picture than the one on YouTube.
Abdul Hamid, who filmed the attack, wrote a caption under his clip: "Footage I captured of some men using the riots as an excuse to just harm and humiliate an innocent person. I hope to get in touch with the victim and I am also trying to raise money for him."
In an interview with Hamid, he said he was very sorry he couldn't help Asyraf as he was too far away.
He only noticed Asyraf when he was lying on the pavement after the attack.
"When I saw him , I then realised I should get something for evidence," he said, adding that he would be collecting money to donate to Asyraf and hand over the recording to the police.
And that is not all. A group of facebookers-cum-tweeters are also busy generating interest among sympathisers and friends of Asyraf.
A friend, Zaila Idrus, a travel consultant with Iman Travel, started a GetwellsoonAsyrafHaziq campaign which has been gathering support among her Twitter friends.
Another tweeter, ShaunCFC1866, has started a campaign to buy back and replace everything that Asyraf had lost to the young criminals.
This article was first published in the NST here

Thank you for sharing.. notice on Youtube the incident.. knew that the guy is Malaysian but not the detail..
May Ramadhan bring you and Brother AG and family Allah's Rahmah, Magfirah and Pleasure

Yes, He is indeed Malaysian - kesian and now recovering from surgery on his lower jaw. Salam Ramadhan to you too.

Salam Ramadhan al-mubarak kak teh. The sad incident was really a shock not only to our nation but to the whole world. Wishing him a speedy recovery.

yes i heard about that via the guardian and through facebook!

i've been kinda blogging on similar issues, doing a mini-series on ICT on my blog (starting May) that might be of interest to you, there even is a post on Twitterature - digital narratives and multimedia storytelling.

it's great to have you back on the blogosphere! i was getting concerned sth might have happened to you, as long time no posts - which is unlike you! ;)

hope you are doing alright and that you don't mind my shameless asking if you could please add my blog to your blogroll?

i think i might have closed the tab without sending the comment... so just in case, i'm starting over:

yes, i heard what happened in london and the malaysian embassy alert through the guardian/facebook and the role of blackberries and social media in the riots. terrible but predictable that rioting would break out eventually!

on my blog, i've been doing a mini series on ICT, social media and web 2.0 starting may 2011 that might be of interest to you. there even is a post on Twitterature - digital narratives and multimedia story-telling!

it's great to have you back on the blogosphere. i was getting worried that sth had happened because long time no posts - which is so unlike you! ;)

i hope you are alright and that you don't mind me shamelessly asking if you could plese add my blog to your blogroll?