I was playing with my food when a very attractive lady approached me with a simple "Kak Teh!" She turned out to be Shireen, the one half of Fash - a dynamic duo that has made their name online recently, joining the increasing number of online business people such as Nek Rock,  Handbaghooks , Royal Shopping Arcade and many more, selling everything and anything you want to buy but dont want the hassle of joining the crowd at the till.

It wasn't too long before we were joined by the other half, Zalifah; another vivacious lady who could possible sell ice to an Eskimo.  Sitting at their table was also Shireen's sister, Laila, who is here on a visit and a sort of unpaid staff.
It was an unplanned meeting; but I had heard of them and their business venture and their planned bazaar on 21stMarch at Stowe Centre in Harrow Road. 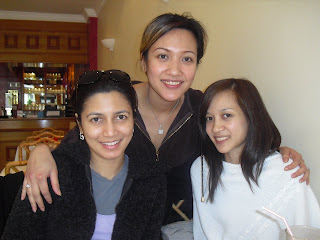 It is almost a year since they set up their business online and business has been roaring, as they display online their spoils after a day at Biscester, at the sales, at Jimmy Choo Couture and also at the London Fashion Week; the highlight of which must surely be when Fash did  a Birkin coup d' etat!  Well done Fash! That's the way to go.

This duo is unstoppable - although they had just met on this British soil, it is remarkeable that they share so much in common; shopping being the most important factor.  They drive cars of the same make and their husbands are in the same line of work.  And most importantly, they share the same enthusiasm and zest that's almost infectious.
That brings me to their project this Sunday.
So, if you are anywhere near London, and would rather give repeats of American Idol and Eastenders a miss, do go along to Stowe Centre, where there will be a bazaar selling everything from clothes to crystal vases and sardine rolls. 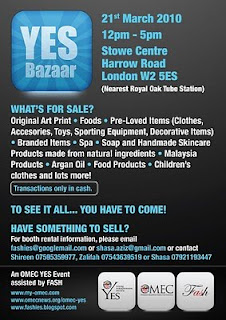 Wish I was there, the ladies sound really dynamic!

Nothing like an entrepreneurial spirit (and a shared passion for shopping or anything, really) to drive one's life up one notch! :)

Kenny dear, I wish I have their energy and enthusiasm and most importantly youth! Its wonderful seeing such a dynamic team like this. They will go far. Me? I had always thought that ferragamo was an italian dish!

Temuk, kak teh pun dah lama tak melawat Temuk. macam2 hal. Thank you for taking time to read. Well, as a perantau, we have to work harder to succeed and I think many out there have succeeded, Alhamdulillah.

We are so touched and honoured that you blogged about us, Kak Teh...

It was a joy chatting with you that day..We are really excited about the Bazaar...Hoping and Praying it will be a success especially for all the sellers and a fun day out for the buyers... See you there!

And Thanx a million for your kind words...has spurred us to do even more..

aaaah, a visit from FASH!!! its a real pleasure and lets hope the event is a success. Am looking forward to the karaoke - hope to hear you belt out a few songs.

good combination of an equal passion. Wishing the wonderful ladies a successful business endeavor. FASH is a very catchy name and good branding too.

TQ again and again Kak Teh, really appreciate it

All the best to Fash, yooooo hi hi from Nek in Arizona:))


Nek rock seefooooo! you are da one! thanks and lots of love and hugs from cold, wet london.

We will try our best to put FASH on EVERYTHING...hehehheheh

Fash, I am sure Dr Sam will be making a beeline to your blog to get something for that special lady in his life. How about it Dr Sam?

tx kak teh for mentioning my blog.
really appreciate it.
would be joining a bazaar in Bangsar this May 1 and 2nd...for people in Malaysia,..comela join.
mai la kak teh, if tiba2 ada kat sini no...