She stops to smell the flowers 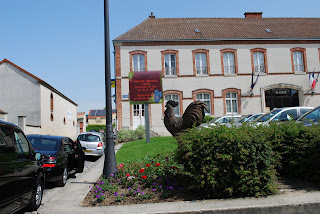 Hi all, this is an article that appeared in my column today.

The quiet Sunday afternoon in the French town of Bouzy, with its undulating hills and miles and miles of vineyards, was suddenly broken by the upbeat sound of Malay joget. Behind the closed gates, guests; French and Malaysians alike, were up on their feet doing the steps. The hostess, a pleasant French woman with her newly acquired Malaysian batik scarf around her waist, was already learning the routine, never before seen in this part of the world.

Dr Ng was on her last leg of promoting Malaysia across cities in the continent and Britain; twelve gruelling programme packed days that saw her reaching out to the local tour operators, singing Rasa Sayang during a boat ride along the canal of Amsterdam, luring the British to retire in luxury in exotic Malaysia and extolling the beauty of eco tourism to the French.

I work hard and I play hard, she admits, working people around her to a frenzy and at the same time, rewarding them with her gracious smile and compliments at the end of a trying day.

Being on the road with her, not once seeing her succumb to lethargy that we lesser beings are subjected to, reminded me of trips with Tun M when he was Prime Minister. At the end of a long exhausting official trip to Hungary, he turned to face the press pack which was beginning to look like the war injured, and asked: Aren’t you all tired?

Only a small lone voice at the end of the room managed to give a meek answer: If the prime minister is not tired, we can’t afford to be tired.

On the last night of her official stay in Paris, Dr Ng hosted a dinner to thank those who made her visit a success. Looking chic in a shimmering short, white jacket that would make any French couture leap out and exclaim Oooh la la, and not a strand of hair out of place, the 63 year old minister had all of us gasp in amazement. Sporting bags under my eyes and wilting under the unusually hot French sun, I couldn’t help but envy her boundless energy and relentless enthusiasm – be it at work or play.

Like Tun M, Dr Ng is a medical doctor and they both know how to look after themselves and without fail look fresh whatever the circumstances. And whatever it is that they have in their supplement box, is certainly missing from the supply of supplements that my other half usually wrap carefully in foils for my journey.

“A breath of fresh air” was the murmur around the room when she finished her off the cuff presentation on Malaysia, “unpredictable and unconventional” were the whispers when she interrupted traditional dance performance to explain further the finer points of the Malaysian songket but all in all, almost everyone was smitten by Malaysia’s new Tourism Minister.

The crowd of tour operators in the opulent surrounding of Hyatt Regency Churchill conference room fell silent as she strode in cutting an impressive and fine figure in her modern yellow silk batik kebaya; the same one that she wore in Amsterdam. That she would appear in the same kebaya didn’t faze her one bit because that was simply not important; a trivial matter for someone who was more concerned about what she was going to deliver and not what she was going to deliver it in.

Throughout the trip, it was evident that Dr Ng was at her elements when surrounded by flowers and plants in the gardens of Kuekenhof, the Chelsea Flower Show and Kew Gardens. It is her vision to make the gardens of Malaysia a tourism product.

“My husband said that I am like a child in a toy shop,” she said as we walked out of the tulip gardens that brought in 800,000 visitors from all over the world. Dr Chin Chee Sue, the unassuming albeit significant other half of the minister was always by her side; helping to carry her bag, taking her pictures and smoothing the crease of her jacket when the need arose. The strides she took are long and fast as she walked among the beautiful geraniums and lilies and tulips. And just when we thought we couldn’t catch up with her, she stopped to smell the flowers.
Scribbled by Kak Teh at 8:14 am

Oh my Kak Teh, you write so beautifully of Dr NYY, and I've not heard anything but praises of her here too. She's one remarkable lady!

Let's hope her tireless efforts and yours included, will help bring teuro-dollars down our way.

column apa kak teh? where is this column?

oo la laa..untung Dr Chin dapat ikut his wife on official duties macam ni..so nice..pleasure for him, work for the wife..but nonetheless a honeymoon for them too.So lomantic laa!

A well-woven post demonstrating artistry and joy sublime in the experience...

A well-written article, Kak Teh. Enjoyed reading it. Thanks for sharing. :-)

zendra, She is really inspiring and I hope she stays on and promote tourism.

Puteri, laaaa, I write for NST - every other Thrusday, kan? Coumn for I am Every Woman.

Mamasita, Dr Chin is such a genial and wonderful person. I enjoyed talking to him. Apparently he reads my blog.

Thanks Paula, I am too tired to write an entry for this blog so long neglected.So i just replublished the column that appeared today.

TM, yes, I hope her promotions bring in results. She is really reaching out to the people.

SkyJuice, thanks for the nice words too.

Astaga Kak Teh.. awat I tak tau... and I flip thro the papers everyday. Thanks for the info.

welcome back Mak Teh! I've heard so many good things about Dr NYY too esp from Mr Geneva himself. SHe sounds really down to earth and a very thoughtful and caring person too! Talk to you later ya!

Welcome back from your travel. Lucky you to have this opportunity to meet lovely and dedicated politicians of our country.

Salam Kak Teh.Thanks for visiting my 'house'.I read your beautifully written article in NST yesterday.So, that s explain why you have been very quiet lately.Hope there are more coming on your tour.
Very nice of Dr Chin to accompany his wife everywhere and assist her.Wow..he even smoothed the crease of her jacket..that is admirable k teh,and only a few hubby would do that in the public.
Goes the same with your AG,how wonderful of him to wrap up all the supplementary.Just what the wife needs.

I love that last line, my dear. The mark of a really good writer is that you've captured our attention till the end, and even then, finished with some oomph! :)

Anedra,she was also full of praise of Mr Geneva. macam mutual admiration society pulak. and I called mr geneva but apparently he was in NY - she spoke to him.

MTT, there are few ministers you'd want to accompany. Some dont even know you exist. But this one really included us in most of her activities.and one important thing is, when she speaks to you, she looks at you. sesetengah tu tidak pun.

Madam Gold, The trip really took a toll on me in more ways than one. I must have slept all the way back and continued sleeping for days and nights. Of course, I;d visit your blog. Inspite of the many interesting things i saw during the trip, i just couldt find the energy to write abt it again.

Aaah, kenny, so kind of you to say that. You know, sometimes you dont even realis that the punchline is coming and it sort of flows. and sometimes it is like that and when that happens , I love it and pray that the sub editors do not ruin it.

thanks for posting this cos stimes it is hard to get thru their web. I always wonder how do these people maintain their energy and youth. You should have checked her vitamin box and share the secret. *grins*

Or alternatively, if we arent doc, marry one. *lol*

our dr yen2 ng sounds like one awesome lady. finally, a minister to be proud of. :-)

Kak Teh: I would love to know what Dr NYY has in her vitamins pack, too. Haha. After one whole week of hectic travelling, I rasa nak pengsan. Age is definitely catching up with me.

Kak Teh,
At last they have found the right person to be the Tourism Minister. I bet there won't be anymore of those silly mega projects in London that will set us back to square one.
I am in Paris now. Please see my responce to your comment on my LAISI.
Salam to Abe Awe.
See you in London soon.

Kak Teh, you are not unlike Dr NYY. Boundless and full of energy:)

Also I fully agree that being a country representative, appearances are so important - Appearances and the Intellect too dare I say. (Tin kosong cantik tak de gunanya:P)