Yes, the members of the 1st Battalion of the Royal Malay Regiment are here - 130 of them. And on 29th April 2008, they started their ceremonial duties at Windsor Castle, in the ceremony of the Changing of the Guards. It was so very grand. And it really warmed my heart on that cold spring morning to see our boys in their Baju Kebangsaan, sampin songket and songkok, marching through the streets of Windsor. The quiet royal town echoed with traditional Malay songs played by the Brass Band. During the ceremony, as our boys led out the members of the British Regiment, the band played Bahtera Merdeka....Bonda senyum riang, menerima bahtera merdeka....
And right there in the parade grounds of Windsor Castle, I cried.

Major Qadri became the first Malay officer in the ceremony of the changing of the guards at Windsor Castle. In this picture, he takes over the duties from Capt.Stuart Vernon of the British Regiment. 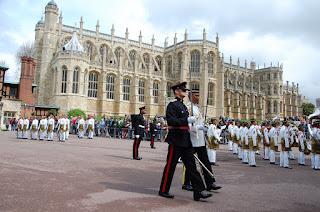 What a beautiful sight! 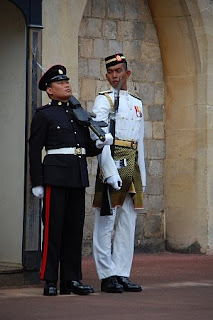 Pvt. Suhaimi Yahya takes over the post from the British soldier.

Tomorrow - 2nd May - anyone in London, do go to Buckingham Palace for the ceremony of the Changing of the Guards. It starts around 10.30 am, but you want to be there early to get close to the gates. They start marching from Wellington Barracks nearby.

Pictures courtesy of the RMR as my camera failed me.


This is my poor attempt to capture the story from RTM1 online.
Scribbled by Kak Teh at 10:22 am

Kak Teh,
Can't blame you for crying when you heard those songs from the brass band. They were hauntingly beautiful. Heard them play those numbers before.
Well remembering home maybe the reason for you to feel that way too.

Told my kids about 'our boys' after you came the other day. Will try to make our way there sometime, InsyaAllah!

zawi, it must be home and also it is the feeling of pride - watching our boys marching so smartly in the royal town of Windsor.

pi bani - haha - luckily I didnt sob out too loud!

D, you should! But you must come on a day when there's a ceremony - or else its not much fun.Let me see what else is in their programme and I will give you a tinkle.

uncle, the song plus the fact that they are our soldiers - that really touched the heart strings!

yatie, last year a senior military officer visited malaysia and he saw the royal malay regiment in parade - he was impressed and invited them over to do these ceremonial duties. Before this, canada, australia and Jamaica. So, our soldiers had to take part in certain ceremonial duties at Buckingham palace, windsor, st james' palace and tower of london.Quite a few programmes involved the band as well as traditional malay dance.

"And right there in the parade grounds of Windsor Castle, I cried"

Very touching.. and what more with Bahtera Merdeka, I too would have cried. And what a sight to behold!

CB
(..with his soft opening)

proud to be malaysian!

how long they gonna be there kak teh?

count byron, how nice to see you here!! so lamaaaaaa tak 'jumpa'. Hope you are well.

nadya, they will be here until mid june, i think - lots of other intersting assignments for the, will keep you posted.

I cried reading this entry.

One of the chapter described in details how the 1st Battalion and the 2nd Battalion fought bravely against Japanese forces during Pasir Panjang Battle in Singapore.

Apart from the famous Lt.Adnan Saidi who died during the battle,I read that about some RMR officers who were executed on the spot by the Japanese because they refused to remove their RMR uniforms.

They died in honour fighting to protect the empire.

And now almost 66 years later,they were standing proudly guarding the royal gate of the empire they once served gallantly.

Nak inform you that I have cut and pasted your posting in a Malaysian miltary forum thread below.


You should see the critiques given in Malaysian blogs and other forums for this action to send our boys to conduct for these ceremonial duties.

But only a Malaysian who sees them in action personally will truly get the significance of the event as you have commendably posted here.

Kak Teh! Masing2 sungguh segak and you can see from their face how proud they are to be there! Walaupun Mas nig bukan Malaysian tapi Mas memang bangga sekali dengan mereka! Wish I could be there to witness it with you!!!

Kak Teh,
Tx for sharing. I didn't even know 'bout it. Teruk kan? But if I were there to witness it, care to share your tissue paper with me??... Take care now.

Kak Teh, thank u for posting the pics and video. Bangga tengok askar2 kita pakai baju melayu lengkap. i wish i was there tho and maybe we cudv cried together-gether. lol.


However, it is indeed a great honour for our country's army to have been selected for this ceremonial task. Despite some of our countrymen dis-agreeing, saying it's a waste of time and money, they don't see the honour and national pride that comes with it. They don't realise that it's the quality of our army that makes the criteria for selection. You don't see some of our neighbours who are supposedly to be more advanced and developed, get chosen for this stint .... :)

Our boys look good! Bold and upright... now if only our politicians can catch up...

Thank u for sharing the story, pics and video. Yes, we at the homeland are sooo proud of them.

Only came to know this after reading your blog. I, immediately alerted a Brit (he loves anything from Malaysia) about the event.

I'm wishing for an assignment to London, so that I can watch them too.

*aireen hands a tissue paper to Kak Teh*

Just read your post on the manuscript you received from Peter Cox.Is it with you or have you sent it to the National Library of Malaysia or the National Archives?Thought I cld refer it here in KL.

It's a historical event! Do you think you can send the original pictures to the National Archives of Malaysia?
TQ.

dr bubbles, one day you must show me the book. teringin juga nak baca.

mumuchi, thank you. There are a lot of talk about that - but i prefer to see the positive side of things. Their presence here made me feel so proud of them.

janishah, thanks for the issue! need lots more.

salt and tumeric - yes, crying together is much better - then no one will dare laugth at us!

shuib, aahm you have missed a great moment. tak apa - nanti kak teh buat some short features for tv and you can watch them.

one-rmr - we are so proud of you! and so happy to be involved in whatever way! Malaysia Boleh! I heard that a lady at the gates, cried and cried as she hasnt been home for some time.

kenny mah - you said it!

nj, i have some more11 watch this space.

aireen - they are here until june - so you still have some time - why not? and it'll be real summer soon.

anon, it is now with the national archives. and may i know who you are please?

anon 1251. are you refering to the pictures of the malay soldiers? Am sure the pr section of the malay regiment will do that. They have a photographer as well as a video cameraman to record the event.

I am a student who frequent the libraries and archives doing research work on Malaysian history. Thanks, Kak Teh.

salam anon, kalau macam tu datanglah ke london - there's plenty of materials in the public record library and British library.
If you are interested to know more abt the letter/manusscript , let me know.

Thanks Kak Teh. I went to the National Archives, Kew and the British Library last year.Yes,I gathered a lot of info there.

Kak Teh, I heard from a source that our boys are paid 2 quids per day as allowance. I just hope it is untrue.