Guess what I did last Sunday?

Usually even wild horses couldn’t drag me out of the house on a Sunday. It was a bitterly cold morning that only bowls and bowls of mee or laksa kedah would suffice to see me through the day. Instead it was to be a Sunday like never before. And it was horses that took me away from the pile of ironing, away from the omnibus version of East Enders. I was dragged, not quite kicking, to the London International Horse Show!! 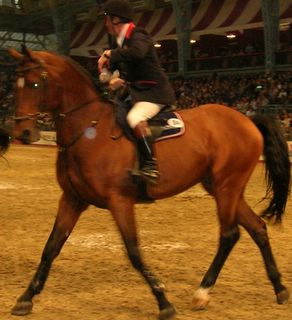 I was late! I didn't want to go but I went nevertheless, taking the tube and later a taxi that cost a bomb for the short distance between and ! I was told to get the invite at the reception. Gave my name – Z...Wan. and I was handed a card that says Wan Z.... “This is not mine – she is a celebrity,” I said to a puzzled receptionist. So, off I went with the card that says : Presidential Box! Not only was it an invitation to watch the qualifying rounds but also to watch it, while having lunch in the Presidential Box!! 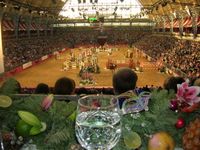 The velvet curtain to the box opened to reveal that...I was late. The guest of honour, a Jordanian Princess, some Lords and of course our own princess – Wan Zaleha Radzi were already there! And what a view from where we were seating!

Not that I know much about the show jumping - there were lots of appreciative Oooohs when the horses made it and a chorus of Aaaaahs when a pole dropped. But I concentrated more on the lunch on offer. It was very nice – they had roast lamb on the menu but a kind waiter came and told us that we could have vegetarian instead. 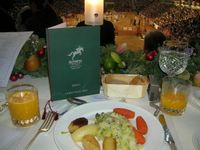 Wan Z was two seats away from Z Wan and I could hear her explaining the whole thing to other guests. She is afterall an expert in these things. She looked lovely – and I remember meeting her once – just once in a studio at TV3. She was doing the voice for my documentary. And she remembered too, which is nice.

There is something about horses that is so beautiful – horses have a combination of power, strength and at the same time they are graceful and agile. It is such a beautiful animal!

The highlight of the event, for me, was the prize giving ceremony. The band played the theme song of Mission Impossible and with that, we marched down with the Princess. I tell you, it was so exciting – I could hear my heart thumping in rythm with the theme song! And yes – we were so close to the horses – they looked magnificient. A friend said, the most beautiful thing about the horse is the eyes. I daren't go THAT near! But what they left behind on the ground wasn’t too aromatic, I must say. I loved it when the winner, Robert Smith and his horse Kalusha rode off in a fanfare of applause – and £60,000!!!

The winner & the Princess 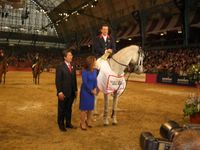 On the tube back, I reflected on the day’s events. My Mak would have disapproved of my presence there. Horses are, afterall, connected to gambling. Remember those calendars with pictures of pretty women in cheongsam holding on to a horse? These would symbolise the dates of racing. I just love those old calendars.

Never in a month of Sundays had I dreamt I would be there - watching a horse show from a Presidential Box. Yes, so that was what I did last Sunday – and I missed East Enders! 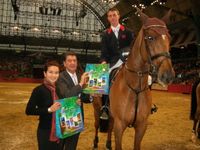 Oh Kak Teh! It looked amazing! I'm sure you had a wonderful time there! There are horses around where we stay and yes, what they left behind is something everyone dread! Sometimes, there's piles of them on the roadside... We have to cringed everytime we walked passed. But they are beautiful and intelligent creatures!!!

I dunno much abt horses, but I've always admired them from a distance. and yes, their eyes can be really mesmerizing in a way, heheh! Hmmm... come to think of it, I've never even been on one...

And what a Sunday it must have been! Those majestic horses, the princess, Ms Wan Zaleha, vegetarian lunch (congratulation KT), and the grandeur of the showcase... all that and you are still pining for East Enders! How funny you can be KT.

Happy New Year to you and your family.

Kak teh, kalendar Kuda tu still popular lah kat sini. I like that kalendar sebab very useful. Banyak infor tu, Bukan tengok race day but loads of other things there. Kalau KT balik mungkin boleh bagi satu kat Kak Teh. Or send me your address so that I can send u one,

Kakteh, what i did last sunday was watching the same horse show from my 20" box ..hehe !! Sambil tu, sempat switch over to Eastenders ... takpa, tak miss banyak!! Next week dah boleh catch up !!

u have been busy lady! oh and the chocs fm the previous post...yummy! the food in this post also yummy!

Kak Teh, where is picture of Wan Z that you posted earlier? You are so lucky to have experience being there.

Ah, so the wordsmith Z meets the telegenic Z. Looks like the horses were worth braving the cold for!

My fren used to send me kalendar lumba kuda tu; the thrill was in the tearing off the date....

Kakak used to go horse riding, but has stopped since last year due to her busy schedule.

horses! now that is something to write about! think they are beautiful animals but am dreadfully afraid of them. And Wan Zaleha ... woo hoo!

i love horsie and love the pictures. that's a true beauty and oh how sexy all of them... and kak teh,how i wish u can post more pics.

Wooww!! Presidential Box lagi :) I tried horse riding and my bumb went numb for days :P I remembered I was driving in Stapleford Park, Leiceister last February and the horses rule over there...(Have to give way to the horses and no honking - nanti kena saman :P) Glad you had fun and it's ok to miss the omnibus of Eastenders :) (You still on it KakTeh? he!he!he!)

when i saw your comment in bergen's, i thought your description of "bodies so great, you want to touch"...i came right over. (not that i've skipped any of your postings though)...hoping to find photo of handsome looking hunk with muscle. (i was also thinking to myself...wow! kak teh is soooo cool...she even dare take pic of naked men.)
Shucks!!!

The ever so lucky Kak Teh. On planes you get promoted without asking. Horse show they'd want you to rub shoulders with the 'who's-who' lots in the P box (lunch sumore!)

Some people have all the luck eh!

Bestnya dapat jumpa Princess Rania. Is she as gorgeous in person? As for the "calendar kuda" story - that sure brings back memories of and my aruah Tok Tan who tried his best to explain why there were all those "kuda" on the calendar dates.....

Gotta have me a horse, the kind you put in money and it rocks to the music of yankee doodle went to town riding on a pony.

I received 2 horse calendars when I bought the kid's school clothes from Pakaian Hari Hari..You want one?

mamijarum, yes, quite enjoyed it. Its a wonderful exerience, but not the smell, lah!
may - i think the horse is a sexy animal - that's the closest I have been.
count - can u imagine O have missed the episode where Nana Moon died! I could have cried buckets!
Ijun! behave - dulu Nasya - ni Wan Z pulak!
auntyN - i pun dapat dulu yang kecik punya - tapi dah out of date. someone is coming to london - kirim!

klmuk - memang I know that it was shown live on BBC - did u see me stuffing my face with food?
prince romp - thanks for dropping by - and yes, I do remember Bt Timah
Ely - yes - been busy - but kena enjoy juga, kan?
AM - i decided not to - tapi perhaps i will - hehe
Sunshine - yes - it was! will tell u when we meet up!
atok, encourage lah akakak to continue!

aneeta, there is a concept of beauty being one that is dangerous and can be fatal.
nadya, I will add afew more.
pu1pu3 - are you coming? when? let me know.
thinktankgirl - eastenders tengah rancak - tak boleh miss.
ummi - now i know how to get you here! hehe
DITH - kerja lahhhhhhhh - cari sesuap nasi - tapi kadang2 tu enjoy lah kan?
lifebloom - bukan rania - tapi haya, i think.
Lydia - good wan that!
bergen - you'd look good on a horse - and whip too!
atiza - nak!!! i will ask someone to contact you!

Kak Teh, got crystal glass some more. I wonder what people thought of you snapping away at the most awkward moments (gambar makanan--LOL BIG time). Did you just tell them, "It's for my blog"?

Whoa... Wan Zaleha Radzi! Is she pretty in person? I could never understand show jumping or horse shows... like girls and formula one.

A lady fren of mine said, pulak, the most beautiful thing about the horse is the Butt.

It is especially magnificent when there's a male rider with nice buns, on top of that horse.